Experience the thrill of Via Ferrata this summer!

Why:  Get the sensations of climbing without the technical knowledge

Where: Various routes in and around Val d’Isere

When: Throughout the summer season 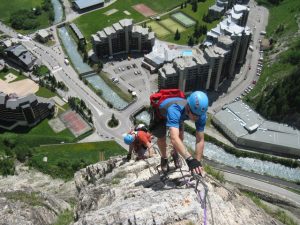 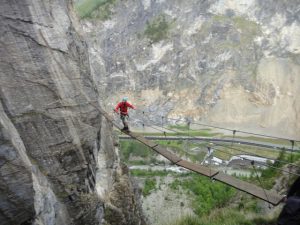 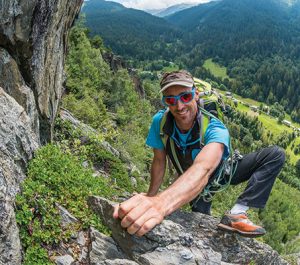 Scaling a sheer cliff hundreds of feet in the air sounds like something only experienced climbers with expensive kit would be able do, but the Via Ferrata – a series of steel rails, cables, iron rungs, pegs, bridges and steps implanted into rock to make a climbing route – makes an aerial adventure accessible to adventurers of all levels.

There are miles and miles of these routes carefully embedded in mountain ranges across the Alps, like an intricate assault course. From families looking for a unique outdoor activity to adrenalin addicts trying to push their limits, Via Ferrata offers an unforgettable experience. You’ll traverse a creaking wooden bridge swinging over a massive drop, climb a long rope ladder up a rock face, jump from one steel rung to another without looking down – just make sure you’ve got your head for heights on!

As Via Ferrata can become a dangerous activity with the wrong equipment, we highly recommend renting equipment and seeking advice from local shops and organising a local guide.

Located in La Daille, on the left of the entrance to Val d’Isère, the Roc de Tovière is a fairly challenging Via Ferrata. The first is for children or true beginners, with introductions to the standard obstacles in via ferrata: steeper slabs, bridges, and small hanging sections. The second section is trickier for beginners and involves 750 metres of cable, two bridges and a long footbridge. After the second, you can either choose to exit, or follow the 20-metre bridge and very steep section. A third portion of the route had to be closed in 2013 due to regular rock slides.

Across from the Roc de Tovière, the Plates de la Daille begins behind the Pierre Vacances building after a 10-minute hike towards the rock face. Though it is considered less technical than its neighbour, the Plates de la Daille is a much longer Via Ferrata and less accessible for those with a fear of heights. As the majority of the route involves ascending the face as though on a ladder, it can get quite strenuous on the muscles – and the mind when looking down. That said, once you reach the top, the views are definitely worth the work.

An hour’s drive from Val d’Isère, the Roc du Vent is definitely worth the trip. Not only is the drive up to Beaufort beautiful, with its tight valleys and overlooks, but this Via Ferrata has some of the best views in the area. It has four different sections, allowing beginners the opportunity to exit earlier on and the experts to finish a relatively difficult route in 5 hours. The most intense sections involve a monkey bridge crossing and a tough ascent.  If you make it to the top of the route, you can find a gorgeous view of the La Gittaz dam and the pristinely blue Roseland Lake, with the infamous Mont Blanc as a backdrop.

Via Cordata of Sainte Foy

A close relative of the Via Ferrata, the Via Cordata of Sainte Foy uses ropes rather than metal rungs to climb. Roped together with your partners, the ascent is done by hooking onto each fixture on the rock face, allowing for a safe climb. It’s is a great introduction to climbing and alpinism, and reassuring for beginners as everyone is roped and moving together. Making it to the top of the Via Cordata here not only means accomplishing a new activity, but being rewarded with an incredible view of the Crot valley below.